Ting Kau Bridge: is a 1,177-metre long cable-stayed bridge in Hong Kong that spans from the northwest of Tsing Yi Island and Tuen Mun Road. It is adjacent to Tsing Ma Bridge which also serves as major connector between the Hong Kong International Airport on Lantau Island and the rest of Hong Kong. It was completed in 1998. The bridge is toll-free.

The bridge is part of Route 3, connecting North-west New Territories with Hong Kong Island. Other major infrastructures on the road includes Tai Lam Tunnel, Cheung Tsing Tunnel, Cheung Tsing Bridgeand Western Harbour Crossing. Compared to the nearby bridges on Lantau Link, Ting Kau Bridge is not just a landmark structure but also carries the heaviest traffic volume of the bridges, with many container trucks travelling to and from mainland China and the HK container port. A chromatic study and specially designed architectural lighting are intended to set the bridge off in its surroundings.

Ting Kau Bridge is the world’s first major 4-span cable-stayed bridge. This meant that the central tower had to be stabilised longitudinally, the problem being solved using the longest (465 m) cable stays ever used in a bridge. The design of this bridge contains special features such as single leg towers, which are stabilised by transverse cables just like masts of a sailboat. The Ting Kau Bridge and approach viaducts link the western New Territories and the mainland to an expressway called Lantau Fixed Crossing, which connects the new Airport with Kowloon and Hong Kong. It meets the Lantau Fixed Crossing on Tsing Yi Island only 500 m from the Tsing Ma Bridge.

The Ting Kau Bridge and Approach Viaduct are 1,875 metres long while the triple tower bridge has an overall length of 1,177 metres. Three towers have been specially designed to withstand extreme windand typhoon conditions, with heights of 170 metres, 194 metres, and 158 metres, located on the Ting Kau headland, on a reclaimed island in Rambler Channel (which spans 900 metres wide) and on the north-west Tsing Yi shoreline respectively.

The arrangement of separate decks on both sides of the 3 towers contributes to the slender appearance of the bridge while acting favourably under heavy wind and typhoon loads. Each deck carries 3 traffic lanes and a hard shoulder.

At a design & construction cost of HK$1.94 billion, it is one of the longest cable-stayed bridges in the world. Along with the Tsing Ma and Kap Shui Mun bridges, it is closely monitored by the Wind and Structural Health Monitoring System (WASHMS). 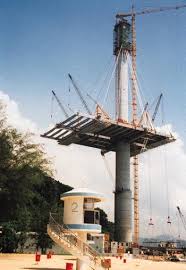 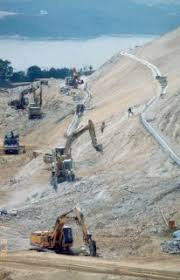 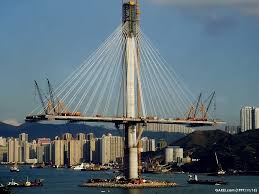 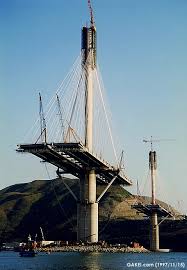